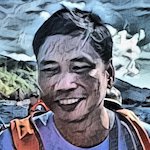 I was born in the city of Iloilo. My mother is a cook, while my father is a driver. Both work for mother’s relative who belongs to a wealthy family. I attended elementary at the University of Iloilo and graduated in 1978. I finished high school at the same university.

I decided to take the entrance test of the University of the Philippines in the Visayas (UPV) held in Iloilo City with BS Fisheries Major in Inland Fisheries as my chosen course. Lady luck was smiling at me that day, and I joined the prestigious school in 1988. I earned the much-coveted diploma after six exhausting years in May 1994.

Having no job prospects yet, I spent a month, from July 18 to August 18, 1994, training at the Southeast Asian Fisheries Development Center (SEAFDEC) in Tigbauan, Iloilo. Later, I applied to Oro Marine Resources, Inc. as a Technician Trainee. I reported for work at their shrimp farm in Bogo, Cebu on September 7, 1994. After almost four months of hard labor, I resigned on January 2 of the following year.

Armed with practical experience, I became more ambitious and got myself interviewed and promptly hired by CP Group for the position of Marketing Executive/Technician in their aquaculture business. CP is a multinational company based in Thailand, so together with the others, I went on an adventurous training there, visiting various shrimp farms and learning the company’s recycling system for more than a month and a half.

After the training, we were assigned to CP Aquaculture (India) Pvt. Ltd., which is based in Chennai, also called Madras at that time. I officially started work on May 6, 1995. Of all the things in India, I like the scenic beauty, spicy foods, and unique culture the most. I gained truckloads of information and experience, but most importantly, I discovered more about myself. I realize that my job doesn’t suit my personality. After four years of toiling, I decided to leave the country for good. It was June 26, 1999.

I am determined to pursue a career in the IT industry. I wanted to be a programmer. To be honest, I never had any chance of using a computer before, but deep down, my gut is telling me, this is going to be the future.

A few days upon arriving from India, I enrolled in Advance Diploma in Computer Studies, Major in Multimedia and Internet at Informatics Computer Institute, then located in Delgado St, Iloilo City. It’s a two-year course, after which I can start looking for a job. The very first day in school immediately confirmed that I’m on the right track. I enjoy solving problems mentally, and this is what programming/developing is about. I graduated in March 2001. On May 2nd of the same year, Informatics hired me as ITT Coordinator/Lecturer. I’ve spent most of the last three and a half years improving my skills while doing lectures. The challenge to test myself against actual software development pushed me to bid my teaching job farewell on November 8, 2004.

My big break as a developer came when I applied at Callbox Sales and Marketing Solutions. The business is a start-up call center operated by two American partners. I was promptly hired as a senior software engineer on January 18, 2005. The first two years were very fulfilling and seemed like a dream come true.

It must be noted that while working there, I got involved in several small-scale business ventures. With a partner, we put up a shop offering computer repair and software programming in Jaro near the CPU. Later, we expanded by adding an internet cafe. I also registered with Amway, a direct marketing company. When an opportunity to start a tilapia culture came up, I didn’t hesitate to join hands with two partners. We operated a tilapia farm in Dingle, Iloilo. Not satisfied, I got myself emotionally engaged in a snack bar in Bacolod City. The bar was conveniently located beside La Salle University.

As expected, all these extracurricular commitments took a large chunk of my time and energy. The endless grind gradually piled stress and anxiety on my weary mind. Then one day, I realized this is not what I wanted. All the “busy-ness” hardly describes my idea of a “good life”. In a span of a few months, I got rid of all of my businesses.

Giving up the call center position was also part of the decision. Physically draining night shifts and an increasingly depressing work atmosphere shattered the illusion of what was once a “dream job”. I enthusiastically walked away from my desk that fateful day of November 15, 2009. Fateful in the sense that I will never be involved in any 8-5 work again.

Days prior to my resignation, I had already dipped my feet into what I consider to be the “real” dream job. I’ve heard from an ex-colleague about this “work at home” gig, and her vivid description of it seems like the kind of career I’m yearning for. She got me to be part of her team. Inescapably, after a year, the team broke up, and I find myself floating from one client to another. Ultimately, I got the hang of it.

And now, I’m still pleasurably banging the keyboard, churning out lines upon lines of code in the confines of my rented house. If you are interested in knowing more about my skills and the projects I’m involved with, check out my professional profile.

My life isn’t as boring as it sounds; it’s not all about work. In my spare time, I do the following, in no particular order:

Reading, learning, and collecting information. We are fortunate to be living in this exciting period of human existence. There is so much development in IT, science, energy, health, space exploration, etc. What would be a better way to spend downtime than to read, learn, collect, and appreciate all of these?

Stock trading is an excellent learning experience. Studying the market is challenging and, at the same time financially rewarding if the analysis is right.

Blogging. In my frequent adventures in the world wide web, I would occasionally come across bits and pieces of information so useful that I am compelled to write about it. Blogging is my way of sharing to the world.

Peer-to-peer lending at Kiva.Org and Zidisha.Org. Just doing my share of helping others.

Going places. Explored some parts of the country together with my tour buddies. The Philippines is blessed with lots of amazing wonders, both man-made and natural.

Playing chess at Lichess.Org. It’s another exceptional mental exercise on top of programming.

Once in a while, I dabble with house design. Small but comfortable spaces inspire me. Check out my designs here and here.

Quality time with my fiancee, family, and friends. This may be the last, but it is the most fulfilling of them all.

So far, this is all that is about me, but I’m sure there’s more to come. Life goes on and so will the learning and sharing.